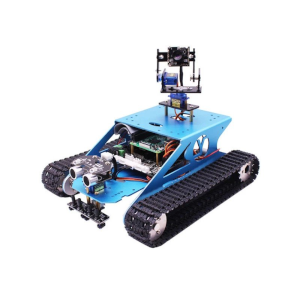 What will you learn

This is an advanced robotics track and we would highly recommend that you complete some of the other coding, electronics and robotics development tracks before you consider taking up this one.

The G1 Smart Tank Pi Tank Robot kit for the Raspberry Pi uses the latest Raspberry Pi 4B/3B+ development board as the core controller. The vehicle is built around a solid blue aluminum chassis, a high-quality track, a high-power 370 motor combined with metal coupling. The G1 smart tank comes fitted with very powerful motors. These motors when powered help the tank overcome obstacles at an inclination of over 60 degrees given sufficient friction. For this Raspberry Pi tank, real-time video transmission is indispensable. The G1 Smart Tank Robot comes with a camera that allows for manual adjustment of the focal length to two degrees of freedom, including the ability to control the rotation of the camera head through the Android phone Bluetooth app. At the same time, the tank could achieve the transmission of the high-definition video stream through the 5G WIFI network of the Raspberry Pi 4B/3B+.

About the Raspberry Pi 4B