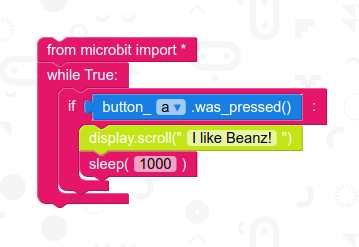 Edublocks is opensource and free to use by everyone. You need to install some software to use it on the Raspberry Pi while developing for the micro:bit does not require installation, but only access to a web browser. You can read more about Edublocks here – https://edublocks.org/

Some of the features of EduBlocks include :

Lesson 0 – What is the BBC micro:bit