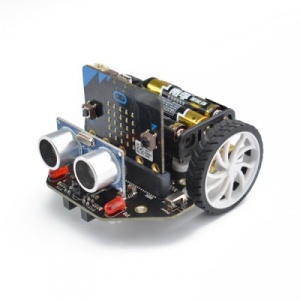 This is an advanced micro:bit track with a focus on exploring robotics using the Micro:Maqueen robot. We would highly recommend that you complete the following tracks before you start off with this track.

The Micro:Maqueen offers educators, parents and kids a great opportunity to build on their existing coding skills and take the knowledge of coding, robotics and electronics to a higher level. If you are just starting with coding and robotics then you might want to program the Micro:Maqueen using the BBC micro:bit Makecode Block based programming language. If you are an experienced developer and have some prior experience working with electronics, robotics then you can program Micro:Maqueen using Javascript or even using MicroPython. The Micro:Maqueen STEM education robot is recommended for kids 8+ years and older. Here are some of the salient features of the robot –

Lesson 1 – What is the BBC Micro:Bit

Lesson 4 – Lighting It Up

Lesson 5 – Lighting Up the LEDs