Lesson 2 – Controlling LED with a Switch

01 / What is a button or a switch – An electrical switch is a device used to interrupt the flow of electrons in a circuit. Switches are essentially binary devices: they are either completely on (“closed”) or completely off (“open”). There are many different types of switches and the ones we will be using on our circuit is a simple push button switch. Here’s what a push button switch might look like.

Here’s how switches might be represented in an electronic circuit.


We use a resistor to limit the current flowing through the LED. In this lesson, we will learn how to program Raspberry Pi to make an LED blink when a button press is detected. Now, let’s get started. Components required for this tutorial include –

Lets wire up your circuit based on the fritzing diagram below.

In this experiment, we have connected a 220Ω resistor to the anode (the longer leg of the LED is the Anode and the shorter leg of the LED is the Cathode), followed by the other end of the resistor to our 3.3 V power source on the breadboard (using the Raspberry Pi Cobbler / T-Extension Board) and finally connected the connect the cathode (the shorter leg) of the LED to B17 of Raspberry Pi. The fritzing diagram below provides a view of all of the connections that need to be made for this tutorial.

We can see from the first schematic diagram below that the Anode of the LED connects to a 220 Ohm current-limiting resistor and then to 3.3V power source (on the Raspberry Pi using the Raspberry Pi Cobbler / T-Extension Board). Therefore, to turn on an LED, we need to program the B17 pin on the Raspberry Pi to be low (0 Volt). This can be achieved using a few different programming languages but in our case we will be using Python.

The second schematic diagram below shows the two diagonally opposite ends of the push button switch connected to ground and the B18 pin on the Raspberry Pi (through the T-Extension Board). In this tutorial we extend the code from the previous tutorial and detect a button press before triggering the LED on/off. Switches are a common component used to control electronic devices. They are usually used to connect or disconnect circuits. Although switches come in a variety of sizes and shapes, the one used here is a 6mm mini-button as shown in the following pictures. Pin 1 is connected to pin 2 and pin 3 to pin 4. So you just need to connect either pin 1 or pin 2 to either pin 3 or pin 4.


Here’s what the real world project will look like once you have wired up all the relevant components i.e. Raspberry Pi 3B+, Raspberry Pi Cobbler / T-Extension Board, breadboard, 220 Ohm resistor, Push button switch and an LED. 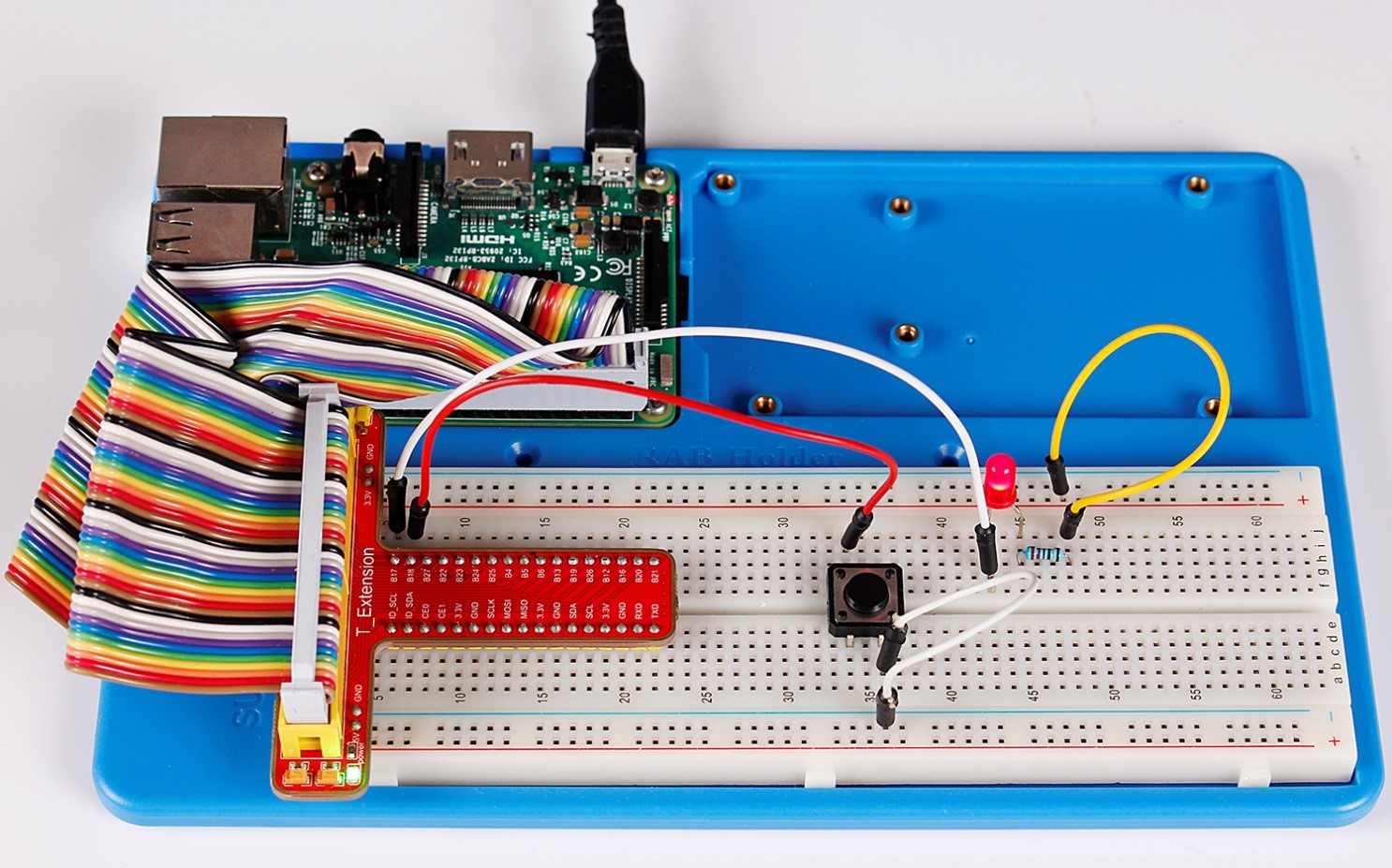