01 / What are the GPIO pins on the Raspberry Pi – (From http://www.raspberrypi.org) A powerful feature of the Raspberry Pi is the row of GPIO (general-purpose input/output) pins along the top edge of the board. A 40-pin GPIO header is found on all current Raspberry Pi boards (unpopulated on Pi Zero and Pi Zero W). Prior to the Pi 1 Model B+ (2014), boards comprised a shorter 26-pin header. Any of the GPIO pins can be designated (in software) as an input or output pin and used for a wide range of purposes.

The numbering of the GPIO pins is not in numerical order; GPIO pins 0 and 1 are present on the board (physical pins 27 and 28) but are reserved for advanced use (see below).

As well as simple input and output devices, the GPIO pins can be used with a variety of alternative functions, some are available on all pins, others on specific pins.

Checkout an interactive pinout diagram for the Raspberry Pi at – https://pinout.xyz/


We use a resistor to limit the current flowing through the LED. In this lesson, we will learn how to program Raspberry Pi to make 8 LED’s blink and use code to trigger off the LEDs (on/off) in different patterns. Now, let’s get started. Components required for this tutorial include –

Lets wire up your circuit based on the fritzing diagram below.

In this experiment, we have connected 8 x 220Ω resistors to the anode (the longer leg of the LED is the Anode and the shorter leg of the LED is the Cathode) of each of the  8 x LED’s, followed by the other end of each of the resistors to our 3.3 V power source on the breadboard (using the Raspberry Pi Cobbler / T-Extension Board) and finally connected the connect the cathode (the shorter leg) of the each of the LED to pins (B17, B18, B27, B22, B23, B24, B25, and B4 respectively) on the Raspberry Pi. The fritzing diagram below provides a view of all of the connections that need to be made for this tutorial. 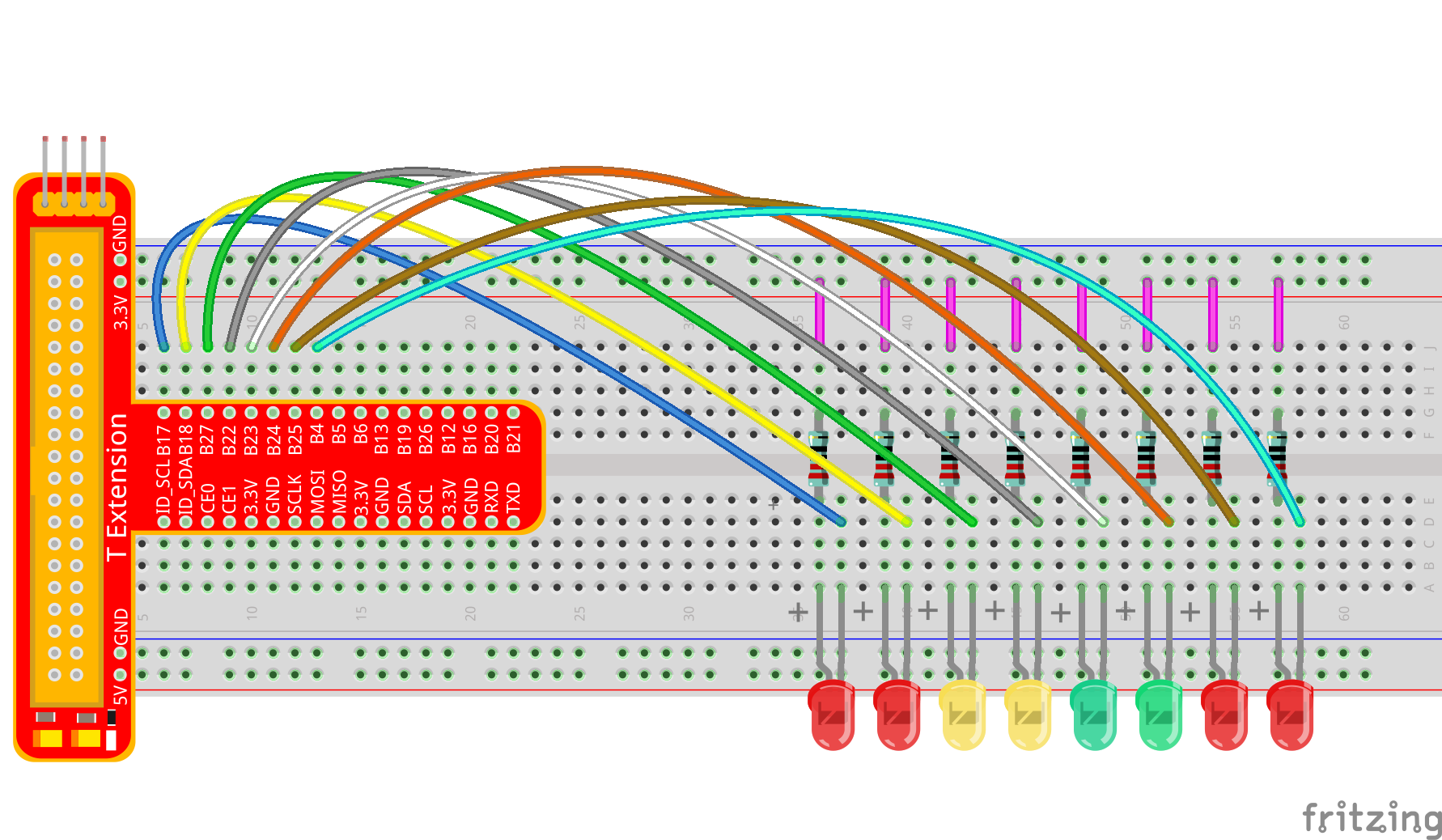 We can see from the schematic diagram below that each of the Anodes of the LED connects to a 220 Ohm current-limiting resistor and then to 3.3V power source (on the Raspberry Pi using the Raspberry Pi Cobbler / T-Extension Board). Therefore, to turn on an LED, we need to program the pins (B17, B18, B27, B22, B23, B24, B25, and B4 respectively) on the Raspberry Pi to be low (0 Volt). This can be achieved using a few different programming languages but in our case we will be using Python. 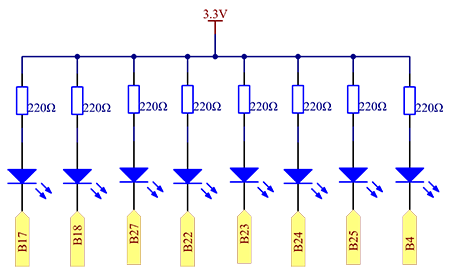 Here’s what the real world project will look like once you have wired up all the relevant components i.e. Raspberry Pi 3B+, Raspberry Pi Cobbler / T-Extension Board, breadboard, 8 x 220 Ohm resistor and 8 x LEDs. 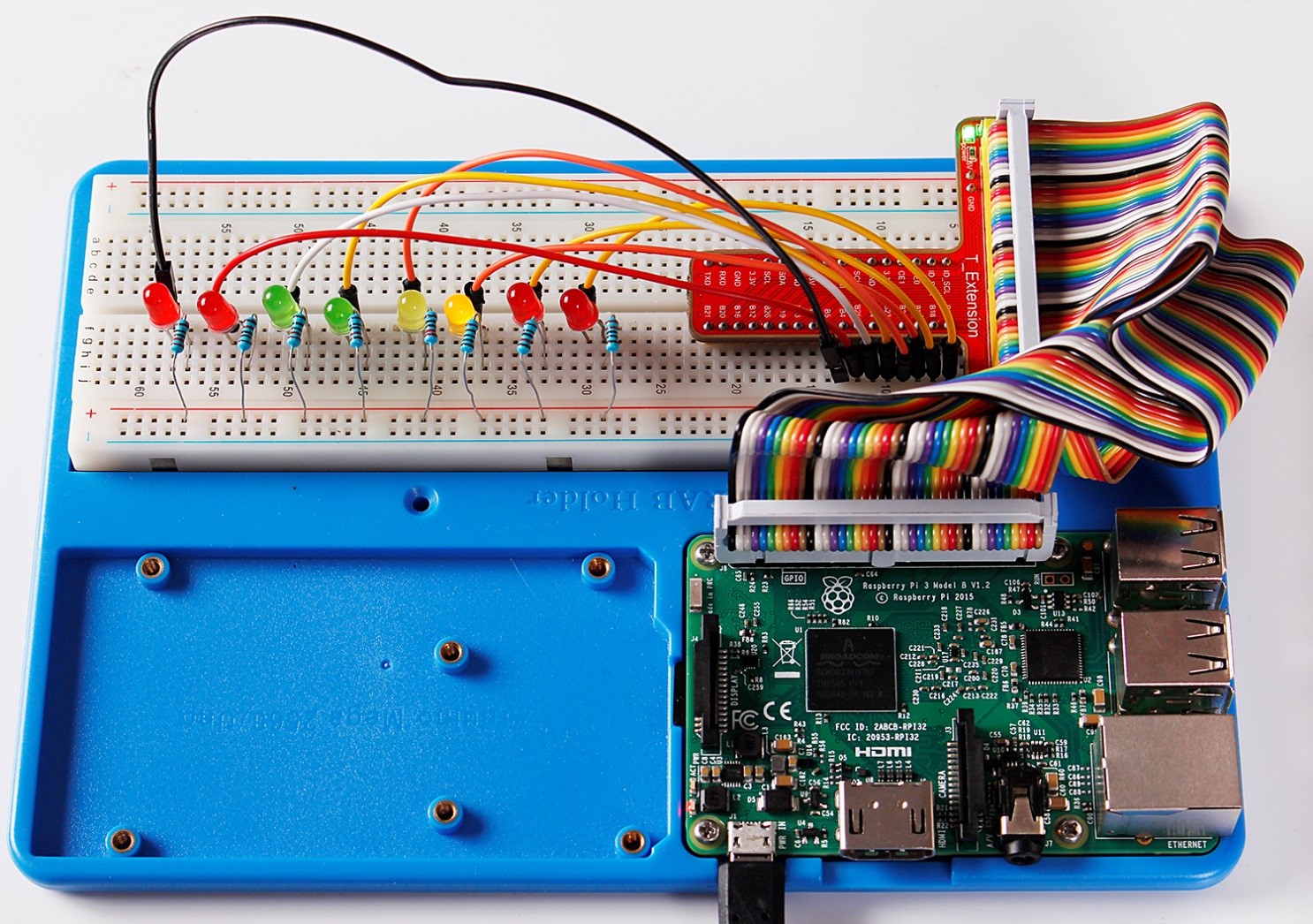