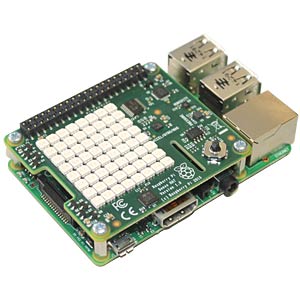 Interacting with the real world using the SenseHAT on the Raspberry Pi is a development track focused on getting you working with the Raspberry Pi & the add-on SenseHat board. The Sense HAT board is an add-on board for Raspberry Pi, originally made for the Astro Pi mission. The SenseHat was launched to the International Space Station in December 2015 as part of the AstroPi mission.  The SenseHAT has an 8×8 RGB LED matrix, a five-button joystick and includes the following sensors:

Using the Sense HAT  on the Raspberry Pi you will learn to interact with the real world through the various on-board sensors. You will use Python (as the programming language) to create different types of animations on the SenseHAT LED’s, measure the room atmospheric pressure and room temperature, measure the speed at which you are traveling, measure the humidity of the air in the room, etc. You will capture the measured values and display them using the on-board  RGB LED’s. The Sense HAT also comes with a joystick which you will program to create interactive animations and games on the Raspberry Pi. Our primary language of development on the Raspberry Pi and SenseHAT will be Python.

Lesson 0 – Introduction and Setup of the Raspberry Pi

Lesson 1 – Getting started with the Sense HAT