01 / What is a buzzer – A buzzer is an electronic device that makes beeping sounds and is used in electronic circuits to provide voice signals. Buzzers are widely used in computers, printers, photocopiers, alarms and other electronic products to create low volume audible signals alerts when actions are performed or rather when actions need to be performed. Buzzers can broadly be categorized as active and passive ones (see the pictures provided below). Turn the pins of two buzzers face upwards, and the one with a green circuit board is a passive buzzer, while the other enclosed with a black tape is an active one.

02 / What is a transistor – A transistor is a miniature electronic component that can do two different jobs. It can work either as an amplifier or a switch: When it works as an amplifier, it takes in a tiny electric current at one end (an input current) and produces a much bigger electric current (an output current) at the other. The transistor functions by amplifying a weak signal to a signal with larger amplitude (more powerful) while also being used as a non-contact switch.

While working as a switch it blocks the flow of current until certain conditions (forward bias) are reached only after which it allows current to flow through the device.  In the switching mode the transistor acts like a variable resistor. The value of resistor between Collector and Emitter is changed by the base current. The Transistor in this case acts as a Variable Resistor or a switch(ON/OFF).

A transistor is a semiconductor with a solid and non-moving part to pass a charge. It can amplify and switch electrical power and electronic signals. Transistors are made of semiconductor material with three or more terminals used to connect to an external circuit.

Transistors are built by stacking three different layers of semiconductor material together. Some of those layers have extra electrons added to them (a process called “doping”), and others have electrons removed (doped with “holes” – the absence of electrons). A semiconductor material with extra electrons is called an n-type (n for negative because electrons have a negative charge) and a material with electrons removed is called a p-type (for positive). Transistors are created by either stacking an n on top of a p on top of an n, or p over n over p.

The transistor is kind of like an electron valve. The base pin is like a handle you might adjust to allow more or less electrons to flow from emitter to collector. 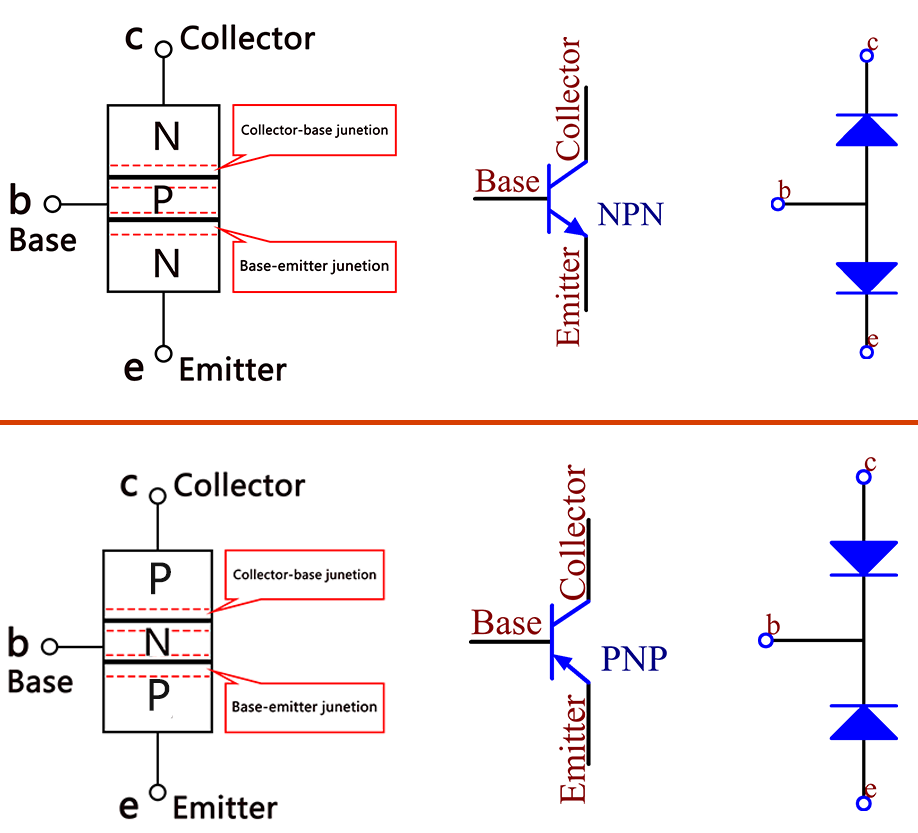 Now, let’s get started. Components required for this tutorial include –

Lets wire up your circuit based on the fritzing diagram below. Your connections should look like the following –

You circuit should now look like the one below. Please run through the connections and compare them to the fritzing diagram below before you power on the circuit. 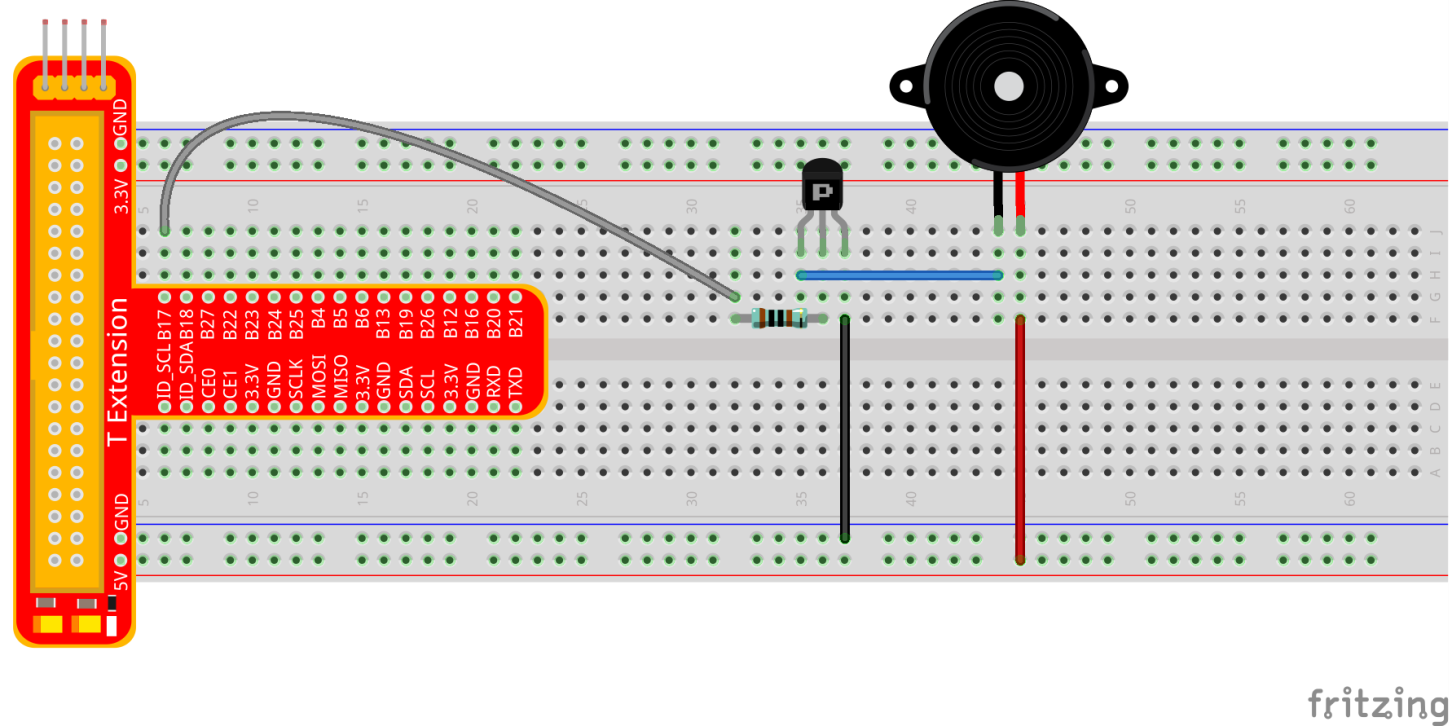 Here’s what the real world project will look like once you have wired up all the relevant components i.e. Raspberry Pi 3B+, Raspberry Pi Cobbler / T-Extension Board, breadboard, 1 x 1K Ohm resistors, a buzzer and 1 PNP transistor.

We would encourage you to try out some variation in the circuit.

These two additional challenges will require you to write additional code and extend the electronic circuit you’ve already built using the example provided in this tutorial. 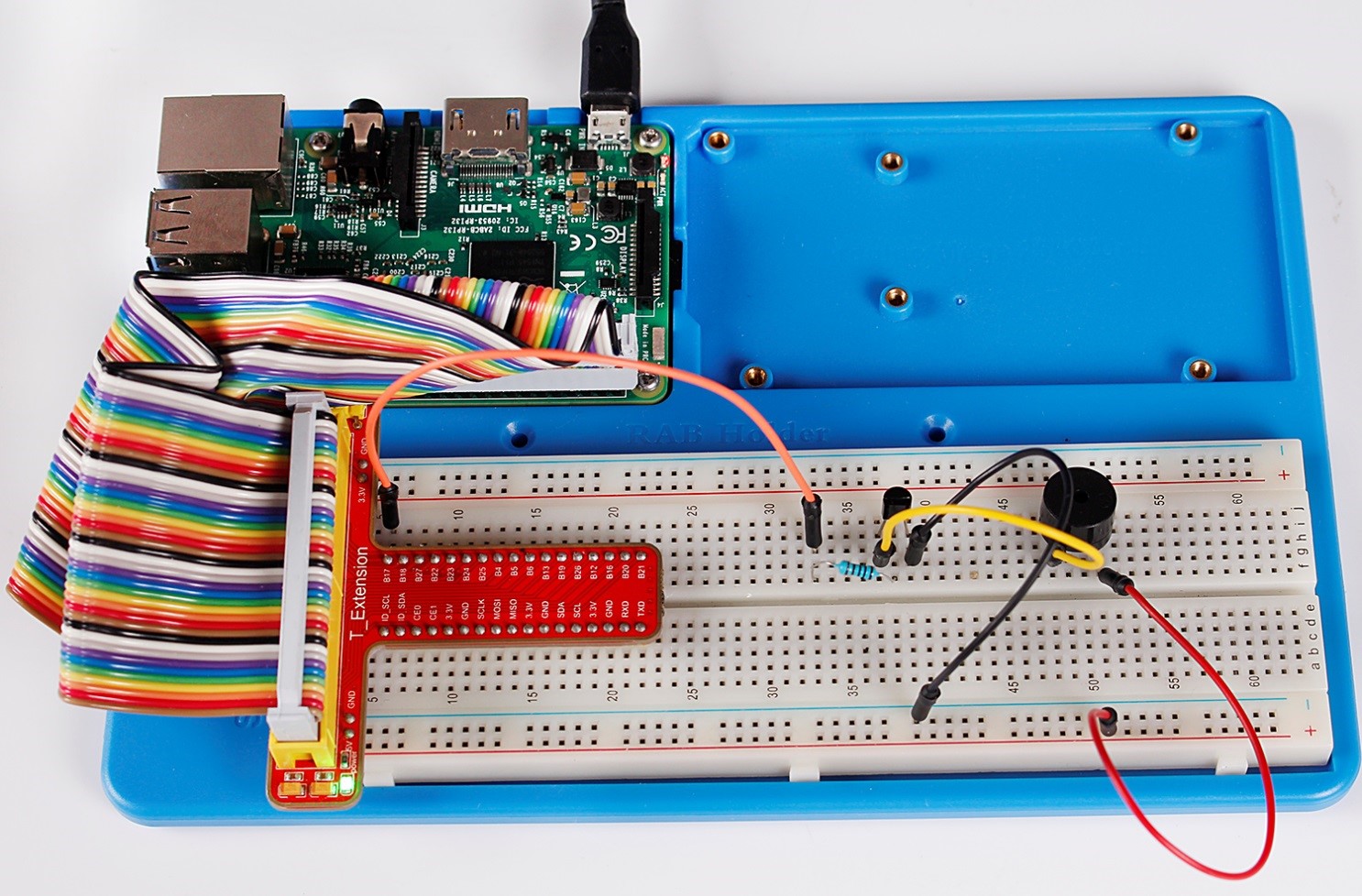